Tohoku (Tokyo) Earthquake – living and working thru after shocks

“May you live thru interesting times” is an often quoted Chinese Curse. People working thru this period of crisis in Tokyo are testament to the concept. “Surreal”. No better way to describe the time since Friday, March 11th. After shocks, regular & serious, remind us that the crisis has not finished. The situation remains terrible for the people living in Northern Honshu who lost family members, their homes, livelihoods and now face real & immediate danger of radiation leaked by the Fukushima Nuclear Reactors. The people of Tokyo face less immediate danger but are challenged by real obstacles. Inconveniences have evolved to legitimate hardships.


-Public Transportation: once a given in Tokyo; where trains, subways and even buses run precisely to schedule. The Tokyo Transit System was the definition of reliability. Since the earthquake, train schedules are unpredictable with some lines closing service entirely for days. The people riding the trains are quiet and more reserved than usual. Remaining polite and tolerant as trains & subways now limiting service seem perpetually congested. (After returning from Okinawa yesterday, I changed trains at Kawasaki Station and entered a front car carrying two huge pieces of luggage. The crowd somehow made room for me and not one person complained.)


-Line ups: legitimate shortages and rationing have resulted in long queues at gas stations, grocery stores, taxi stands, banks and Narita Airport Check in Counters. My wife waited half an hour to get into a grocery store and another half an hour before she reached the cash register. (We observed numerous stores and service stations that locked down and closed due to lack of supplies.) 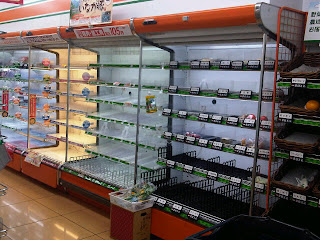 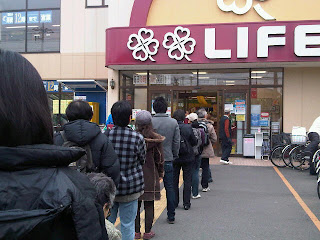 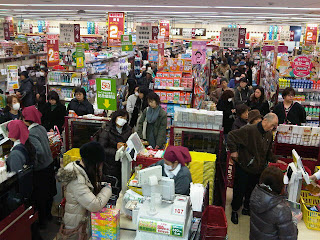 The Branches of Mizuho Bank could not supply cash to their patrons from tellers or ATM Machines. This was News worthy as several people politely turned away by bankers (dressed smartly in three piece suits) were interviewed by a local television station.


-Rotating Electrical Brown Outs: sectors outside of the main 23 wards of Tokyo are having power shut for hours at a time. Lights are shut off wherever possible, escalators are closed, and many companies are working half days to preserve energy. (The electric shut offs create a domino effect as traffic lights, computer generated communication and cell phone reception is negatively affected.) This distracts business offices but it shuts down most production operations. (What industry doesn’t need electricity?)


-Fear: decisions by Foreign Governments and Corporations to move Expatriate Employees to Southern Regions of Japan or out of the Country initiated concern with Japanese and Foreigners living in Tokyo. Some of our associates in Investment Banking moved to Osaka & Hong Kong to work temporarily with their respective satellite offices. (Flights from Narita to Kyushu, Guam, Hong Kong, Thailand, and other Southern Destinations are sold out. The Expatriate exodus and subsequent crowds at Narita and Haneda Airport resemble the Golden Week and New Year Holiday Travel Seasons. Rumors of winds carrying radioactive particles thru Tokyo on Wednesday Morning at 5 a.m. accelerated decisions to “fly South”.


While traveling to Narita Airport today one man asked if I was an “Expatriate” fleeing the nuclear danger. He seemed pleased when I answered that “my destination was Germany on a scheduled trip.” A reporter and photographer pulled me aside for a quick interview as I boarded the bus from Suitengumae to Narita Airport. They remarked that I was “lucky to be scheduled for a trip during these serious times”. “When will you come back they asked?” “Next week”. I replied. “Japan is my home. My wife is Japanese. This is where I live and work. I’ll be back.” They smiled.
Posted by gcrunning at 7:48 PM