Miura City in Southern Kanagawa is famous for beaches friendly to Wind Surfers, Fresh Tuna and delicious “Daikon” a Giant Japanese White Radish.  It also hosts a very exciting and competitive Half Marathon.  The Miura Half Marathon follows the Tokyo Marathon by only 7 days but shouldn’t be negated.  It’s a real treat for any serious runner or weekend warrior. 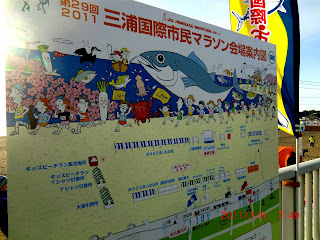 My In-Laws live in walking distance of the starting line and my Father in Law began his four year string of entries at the age of 64.  His passion and excitement for the Miura Runs motivated my entry last year and today.  Last year’s rain, wind and cold made for one of the toughest sporting challenges of my life.
This year’s perfect March Weather with sunshine and virtually no wind was ideal but it was difficult for other reasons.  (The Course has serious climbs stretching over 2K.) Miura Marathon institutes time limits defining ultimate failure.  My goal in 2010 & 2011 was to finish within time restrictions; the 2010 Half Marathon demanded you cross the line in 2 hours and 20 minutes and the 2011 10 K  required a 70 Minute Finish.
Following are 10 items to Love or Hate about the Miura Half Marathon Festival:
LOVE:
-1-LINING UP TO START:  Feeling like a Rock Star as the Paparazzi (family) take photos while wish you luck as you line up to start.  All this while standing in the midst of thousands of other runners performing pre-race rituals. (This Year’s 10K had 4000 Runners.) 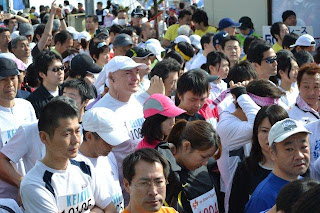 -2- SCENERY: Clean Air, Views of The Ocean, Palm Trees, Bamboo Fields, Rural Japanese Homes, Rice Fields, Vegetable Gardens, Mountains, Temples, Shrines and a large Traditional Cemetery along the course.
HATE:
-3-WEATHER: The rain, cold, wind induced discomfort, & foot blisters that came with wet conditions.
-4-CROWDS: The tight lanes that congest when course changes turn reasonable running paths into venturi with no hope for individuals to pass for better times or speed up to make the cut off.
LOVE:
-5-COMPASSION: The runners and side line fans that successfully encouraged my father in law to continue after his Hip Flexor Injury.  (He wanted to limp to the side lines but other competitors wouldn’t let him quit with one kilometer left to run in his 5K Event.)  One over zealous spectator actually pushed him back onto the road way and yelled “Mousukoshi Ganbatte” (keep fighting –only a little more to go).
HATE:
-6-INJURIES: Making the decision to continue running & not assist a competitor who went down over a speed bump.  (It was the right choice as he was already being assisted by two other runners, a race observer, and the ambulance ultimately arrived in minutes.)  It didn’t feel right & still doesn’t.
LOVE
-7-FUN: The runners that dress in costumes. Many suit up as Giant White Japanese Radish “Daikon”, Fire Hydrants, Post Office Boxes and Comic Characters.  One Half Marathon Star paints his face like a Panda and runs in a China Dress. 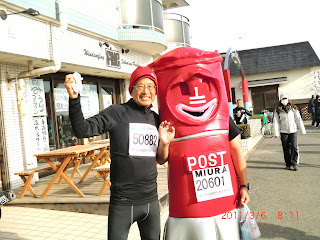 -8-RACING with ELITE ATHLETES: About 2K into the race the Police Motor Cade forces the Ten K Runners to the Left Side allowing the Elite of the Half Marathon to pass on the right.  I was humbled and inspired by the perfect glide and excessive speed of the athletes as they fly by us “also rans”.  (The crazy guy in the Panda Make Up and China Dress was in the Leader’s Pack.)
-9-RACE SOUVENIRS: A Beautiful Performance Running Shirt,  one Fresh Japanese Giant White Radish and a Color Finishing Certificate are collected at the Miura Beach after finishing the run. (We ate the fresh “Daikon” immediately after the race and it was sensational.) Talk about little big things; the race organizers promoted the local vegetable by handing out recipes for Daikon Dishes as you left the Beach.) 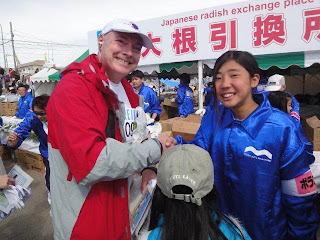 -10-FINISHING:  Making the half marathon cut last year in spite of wind, rain, cold and blisters was a personal triumph.  Beating the clock in this year’s 10 K without properly training was equally gratifying.  Both achievements were surpassed by my Father in Law who limped the final mile to record a reasonable time and Finish. 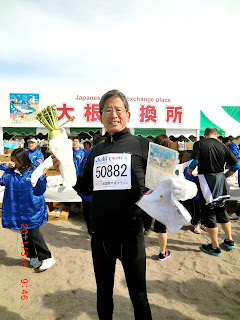 Personally, the best part of the race has been locating my Bride on the finishers Beach to score a kiss that she’s awarded after both race completions. (It’s real motivation to sign up for the 2012 Event.)  Did I mention Finishing?
Miura International Marathon              http://www.miura-marathon.com/ (Japanese Only)
Posted by gcrunning at 2:21 AM