When our family is looking for convenience, Excellent Choices from antipasti to dolce and good service at a reasonable price we visit the testa-coda restaurant. The restaurant is well designed to give a modern and spacious feeling even when every table is full.


We optioned for the Dinner Set and feel it offers best value. Two set courses were more than enough for my wife, 9 year old daughter and myself. Our favorite item for the evening was a sautéed pork entre served with a gorgonzola sauce. It edged out a lovely roast duck, spicy Penne All’arabbiata, and a seafood pasta combination. (No complaints; we’d order all these items again.) The Penne is our family’s restaurant acid test. My daughter refuses to eat pasta that isn’t al dente. (Let’s pray for the young man that one day takes her to the “macaroni grill” on a first date.) 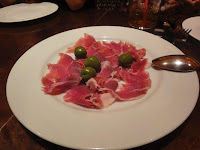 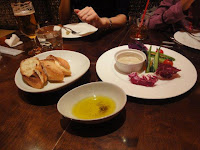 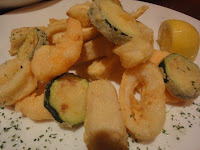 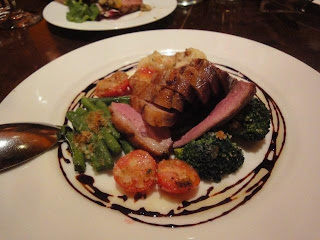 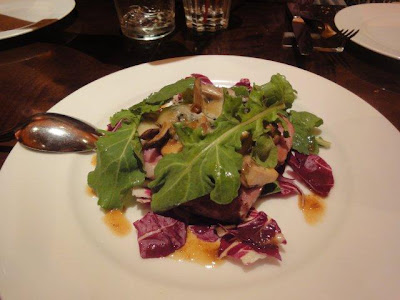 The anti-pasta weren’t bad. A tempura like “fritto misto” was well received and as usual my daughter loved her Prosciutto (Parma-Ham). The Bagna Calda (Italian hot anchovy garlic dip for vegetables) was passable as were the yogurt sherbet and tiramisu we shared at dessert. The wine list has several nice options at varying price levels. We selected a 2006 Barolo and were not disappointed. It was our third trip to the testa-coda and we’ve enjoyed quick and energetic service each visit. The atmosphere is more enthusiastic than professional and some nuisances such as wine etiquette seem to have been lost. This didn’t stop us from enjoying the evening. We’ll visit the testa-coda again. Hopefully soon.


Japanese only with coupon - print this page out to get the complimentary offering below:


1) One complimentary drink with course menu, or 2) 1 complimentary bottle of wine with 4 people’s ordering 3800 yen course each.

Posted by gcrunning at 9:30 PM No comments:

Email ThisBlogThis!Share to TwitterShare to FacebookShare to Pinterest
Labels: Restaurants

The Bangkok Marathon: a Surreal Experience


“Mr. Jooky” is an English Speaking Taxi Driver with a world of experience.  He picked me up at 4:00 a.m. and we traveled to the starting line of the Standard Chartered 21 Kilometer Race. (The Venue has five runs including  a short 2.5 K run and the full 42.195 K Marathon.)  “Mr. Jooky” is quite representative of the people occupying  the “Land of a Thousand Smiles”; positive,  friendly and hard working.  On the way to the Royal Palace where the start and finish lines are located he pointed out a monument erected to the “one thousand” students gunned down by the Thai Army in 1973.  “One hundred thousand marched in protest of the government.  Two of my friends died before my eyes.  Most of us escaped and took refuge in the King’s Palace.”  (This was the Thammasat University Massacre.) His explanation finished as we pulled up to the corner of an intersection.  “Your starting line is just down this street. Have a good run.”
It was a great run.  A very international crowd full of Europeans, North Americans and large numbers of Japanese, Singaporeans, Hong Kong(ers) and other South East Asian Countries.  The local Thais were well represented and thousands of volunteers made everyone feel welcome.  The course was relatively flat but challenges come from the humidity and pollution.  The course is impressively scenic but a large portion of the race is run on one side of the highway and the opposite side of the road was packed with vehicles.  (I started an asthma like wheeze while on the freeway and was very pleased when it diminished once away from the traffic.)
Let me list the things to like and love about the Bangkok Marathon:
-1-  Starting at the Royal Grand Palace a 5:00 a.m. when the weather is most temperate.  The Thai Band entertaining runners lining up for the half marathon was pretty good.  Their rendition of Maroon 5’s Moves like Jagger was terrific.
-2-  Crossing the Rama VIII Bridge lit up and beautiful before sunrise.


-3- Being saluted by Thai Imperial Guards in full dress uniform as we passed the Ministry of Defense.
-4- Water Stations every 2 K with watermelon venues positioned in two locations along the race route.
-5- Observing the “Elite Runners” mostly from Africa as they warm-upped.  (They float and glide; inspiring.)   Other races isolate the Invited Professionals but at the Bangkok Marathon they were one of the crowd. They had to fight their way to the front of the pack before the starting gun fired.
-6-  The 25 degree weather. It’s much better to run when it’s warm at my age.  Caveat: temperatures rose noticeably as the race progressed making the last 5 K much more difficult than the first 16 K. (We passed an elite runner as he walked back to the starting gate. He didn’t look happy & I thought this might be a very bad omen.)  Add suspect traffic control & the need to dodge the odd motor bike and you really do have a tougher last half.
-7- Sponsors distributed beverages and burgers as you departed the course.  Once off the Marathon Site, I gave my Filet of Fish and Cheese Burger to a tuk-tuks driver who then ungratefully refused me a ride. (This was after an offer of twice the normal fare. I think he didn’t know the location of my hotel.)  I watched him drive off with the sandwiches and looked for a taxi.
-8- The start was as exciting as any race I’ve ever entered but finishing was probably the most gratifying.  (Did I mention the last 5 K were really tough for this Canadian?)  Finishing also allows me to have some fun discussions with friends who offered advice and concern for the heat, humidity, stomach devastating bacteria and jet lag.  One of my positive “comrades” even offered this tidbit in an email:  “I don't want to see you on TV with some Para-Medic over you doing compressions!!!! Ha! Ha!”  Hey Guys! I finished and am still standing.  Thanks for the help.
We’ll recommend the Bangkok Marathon to anyone who can make it to Thailand. On line registration was easy and the race package pick up was straight forward.  The goodies included a pink running shirt, number and time chip, a shoe and tote bag with the race logo and general information.  Would I do the run again next year?  Let’s let the blisters heal and we’ll think about it.  In the mean-time there’s some delicious Thai Curry and a Singha Beer waiting  for me. 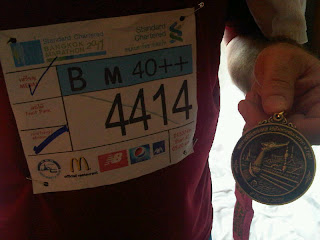 Don’t miss a meal when you visit Hamburg

Last week we were treated to three Excellent Restaurant Experiences in the February Cold and Beautiful City of Hamburg, Germany.  All the establishments offered sensational scenery, creative décor, extensive menus/wine lists and first rate service.  Hamburg is built around two lakes, the inner and outer Alster, & lines up against the very busy and scenic River Elbe. Hundreds of canals run thru Hamburg creating the necessary infrastructure of bridges. (Hamburg has more bridges than Venice.)  The City is known for its greenery in spring and summer but this winter it was covered in snow.
The FISHclub
The FISHclub offers you tables facing Bay Windows that allow views of huge Cargo, Cruise and Sailing Vessels.  The frosty weather made our dinner especially picturesque as thousands of little icebergs floated down the Elbe from the North Sea and ground up against the nearby dock.  You can reach the FISHclub by Ferry Boat starting near “Speicherstadt” the former Brick Warehouse Area near the River. (It’s now home to tourist attractions including the world famous “Minatur-Wunderland’ and ‘Hamburg Dungeon.”)  We drove to the Wittenbergen (White Hills) Restaurant Location and admired the beautiful large homes originally founded by Sea Captains stationed in Hamburg. Three of us shared a mixed grill of local catches and a rump steak.  Nothing was left on our plates. 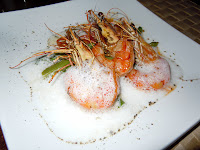 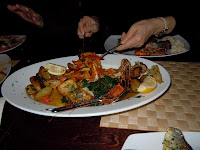 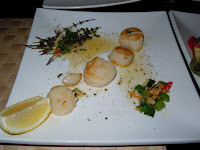 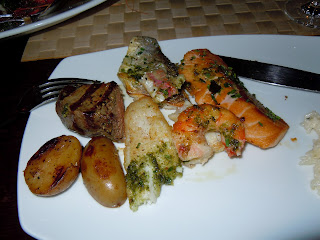 The Fischereihafen
The Fischereihafen Restaurant is located just outside the huge Hamburg Fish Market and has been run by one family for over 60 years.  This restaurant’s view of the Elbe and the impressive “Dockland” Office Building resembling a huge glass ship make a cocktail at the Oyster Bar a must if you don’t have time to dine .  Meals at the Fischereihafen are exquisite. I sampled the lobster bisque while my colleagues favored the popular Hamburg smoked eel soup.  The menu included something  for anyone who loves seafood.  My pouched sole was served with a light safarin based sauce delicious. Especially matched to a crisp glass of Riesling.  Caveat: you’ll enjoy everything from start to the highly recommended Tiramisu but might suffer sticker shock when the check is politely dropped at your table. 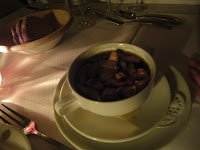 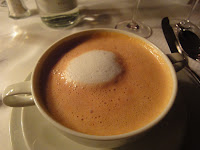 Die Bank
If the raw beauty of the partially frozen Elbe River was dynamically impressive at the FISHclub and the stately views of modern architecture enhance  the charms of the Fischereihafen Restaurant, the “Die Bank” has the best sense of humor.  The popular Dining Venue is built in a large retired bank building in Central Hamburg. An old vault is used as a cloak room, pictures of famous American Bank Robbers grace the walls and modern art is strategically placed around the room.  We all selected the “Wild German Venison” and were not disappointed by this course.  We preceded the Venison with a selection of appetizers prepared upon special request.  Everyone finished the evening with a satisfied smile. 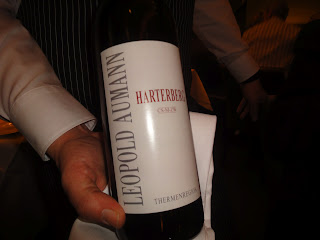 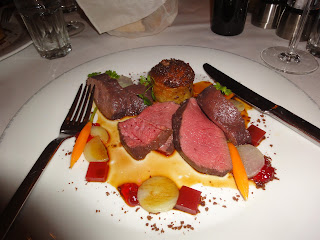 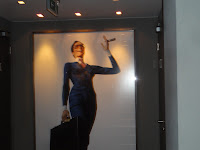 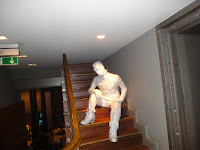 Posted by gcrunning at 11:25 PM No comments: