Valentine’s Day in Japan: A Celebration of Chocolate

Forty Years ago Japanese Chocolate Manufacturers launched one of the most successful marketing schemes of modern business.  Chocolate Sales on Valentine’s Day!
Actually the concept of a Valentine’s Day (pronounced Barentain Dei) in Tokyo and gifts of Chocolate was a slow starter until the mechanisms of Japanese Social Structure were carefully harnessed. In short, Japanese Women were convinced that Chocolate should be given to your loved ones on Valentine’s Day.
More importantly the practice of giving “Giri choco” (Obligation Chocolate) to your Boss, Father, or University Professors later took hold and brokers of coco beans stood back and smiled.  Today 10% of the Chocolate Industry’s $3.6 Billion Annual Sales is distributed in the first two weeks of February.
The Japanese Male of the 1950s would not easily buy into the Valentine’s Day Romantic Tradition but in the 70s the Confectionary Industry struck again with White Day.  The March 14th counter to Valentine’s Day offers venues to men wishing to return favors by purchasing  candies and cookies for loved ones. My wife informs me that young girls who have gifted their favorite boy with chocolate wait for White Day to learn his true intentions.  If she receives candies, he likes her.  Cookies are a luke warm response.
She also reminded me that husbands, fathers, bosses and other men lucky enough to get chocolate won’t enjoy a repeat gifting the following year without proper attention to White Day.  In fact, the Modern Day Japanese Women have serious expectations for White Day and suppliers such as Cartier, Louis Vuitton and Tiffany’s are enjoying the benefits.  (I bought my wife a new iPod Classic, yes, a white one.)
So how did this Canadian do on Valentine’s Day?  Scored big with serious chocolate.  Pierre Marcolini, GODIVA, FERRERO ROCHER, and some Potato Chip Chocolate by a Sapporo Company called ROYCE.  Japan is a utopia for a man Addicted to Chocolate.  But what about Romance you ask?  The Japanese save that for Christmas Eve (and that’s another subject for a Blog later this year.) 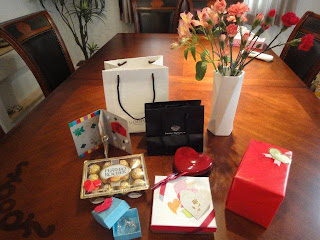 Posted by gcrunning at 9:24 PM