Coach Larry Donovan; American Football in Tokyo (The Chrysanthemum and the Quarterback)

Coach Larry Donovan is my Client, Friend, and Father figure.  Find his Wikipedia Listing and you’ll read testaments to his Athletic Ability demonstrated at the University of Nebraska.  You’ll certainly learn about his success as a Head Football Coach at the University of Montana and the Professional BC Lions of the CFL.  There might be some nice articles on his marriage to Georgia ; an Artist, Scholar, Miss. Nebraska and the Miss. Congeniality Winner at the Miss Universe Pageant.
You will find little if any Historical or Biographical Data concerning  his seventeen years spent living and coaching in Japan.  He left an indelible impression on the Sport of American Football in Japan and was a positive influence on everyone fortunate to work or play for him.
His tenure of two decades was unprecedented and remarkable.  It began at the peak of the Japanese Bubble and carried on thru tougher Economic Times in Japan.  The Coach survived the Team’s Sponsor switch from  Hitachi to a Mitsubishi –Hitachi Joint Venture Company called Renesas.  His Career in Japan also weathered internal bureaucratic changes at the Sponsor Companies and allowed for Annual Contract Renewals on seventeen successive occasions.  If asked, the Coach attributes his good fortune to luck & the efforts of the Football Team’s General Manager, Mr. Atsuyoshi Koike. ( I think that Winning Records and other factors also played into his Careers continuity.)
To appreciate the Coach’s impressive win and loss records (above .600) and the Hitachi Hurricanes climb from a poor Division IV Team to competitive Division I Japanese X-League Member, we need to understand the Challenges & Obstacles:
-The Coach did not have Japanese Language ability nor assistance from an Interpreter.  He did not have any association with Japanese Culture prior to landing in Japan to Coach Football.  All Practices and Team Meetings were held in English.  (A tribute to the intellectual nature of the team and their eagerness to learn the game.)
-Successful Teams in the X-League have Rosters full of All Japan Players from First Division Universities – the Hitachi Hurricanes were made up largely of Division II & III University Players.
-The Top Corporate Sponsored X-League Teams recruit great Players and find positions in the Corporation for as long as they remain part of the Team.  Hitachi Hurricane Players were Engineers hired to contribute to Integrated Circuit Projects and were given special permission to play Football.
-Division I Teams practice five days a week and play games on weekends.  The Hitachi Hurricanes practiced on weekends, holidays, during Vacation Season and met Wednesday Night for Team Meetings.
-Japanese Championship Teams recruit 15 to 20 New Players Annually and most Athletes play 3 to 5 Seasons.  Hitachi added 3 to 7 Players each year but most Hurricanes continued playing thru 8 or 9 Seasons. (The Players’ longevity is significant as their Family’s Spring & Summer Vacations and Weekends were sacrificed in favor of Football Practice and Games.)
Most of us wondered how the Coach would Win a game in Japan without language or cultural back ground, better or equally talented players, time to practice and a barely replenished aging roster.  I’d hold my breath on mornings after game days waiting to hear results and details from “the horse’s mouth.”  The results were always close.  The Hurricanes usually found ways to win and the Coaches Magic got them by – but never by much.  He brought innovation to the game and applied it in ways suitable to his personnel.  A novel swinging gate option to compensate for the absence of a reliable kicker, a double tight end offence that few 2nd Division Defenses ever coped with and a Passing Game that allowed his Hurricanes to compete in Division I.
His Team’s Motto was “Do your own Job.”  It united and focused a group of men more familiar with a Club Team’s Democratic and Playing Coach Style of Leadership.  He spent hours of time watching video to find ways to improve his team and prepare (over-prepare) for games.  The Hurricanes got better and opponents weaknesses found on film were exploited on Game Day.  His Game Plans were not complicated & Hitachi often won games by simply “running outside or inside the Defensive End” (depending on alignment to the Hurricane Double Tight End Offense).  The Great Ones make it look easy and the Coach made the right decisions.
The Team understood the Coach’s direction. A side line discussion with his Quarterback was overheard as follows:  “Run the 36 Tailback Option and don’t pitch!”  “Yes Coach,” replied the QB. “What did I say? “ asked Donovan,  “36 Tailback Option, don’t pitch.”  “Don’t pitch” repeated the Coach.  “Yes Coach, don’t pitch”.  The result was a well run play without risk that gained a first down, ran out the clock and advanced the Hurricanes from Division 2 to the Premier X League.  (The Coach’s rule in Japan was to pose important questions to more than one individual and be sure the answer was repeated for clarification.)
While in Japan, Larry Donovan exemplified focus, clear communication, the ability to condense complex planning to simple formula, an exceptional work ethic, and the ability to find ways to Win and make Winning his Team’s Habit.  He could converse with anyone (in English) starting with the common denominator of sports and especially football.  Mr. Koike, Team GM and a Business Vice-President at Hitachi was negotiating with Gentlemen from Texas Instruments and talks moved close to stalemate.  He called the Coach and asked him to drop by to join the group for some drinks in the Evening.  After three hours of conversation revolving around American Football the Coach departed for home.  “Is there anything else I can do?” he asked Mr. Koike.  “No, I think that will be fine.”  The mood was changed and business was successfully concluded the next day.
At the end of the day it’s all about people.  Coach Larry Donovan is one of the finest. It’s not an overstatement to say that he left Japan and American Football in this Country a little bit better. Not a bad legacy. 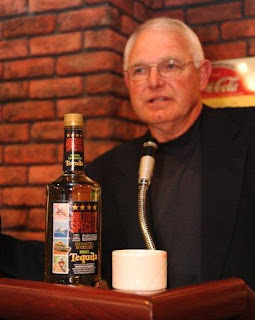