Over the years in Japan I’ve glimpsed Setsubun Festivals thru Television and other media with limited knowledge.  The cleansing rituals practiced at Shrines, Temples and Homes by casting “iri-mame” (roasted soya beans) and yelling “Oni wa Soto, Fuku wa uchi” (Devil outside – Luck in the House) makes the Japanese News Annually.  Once bad luck is driven from your home, the tasty beans are collected and one ”iri-mame”  is consumed for each year of your life.
The Cultural Package has its Regional Influences such as Kansai’s Eho-Maki Sushi made special for the occasion. (It’s delicious and prior to my marriage to a Japanese Woman I purchased it several times at my local grocery store.  This was done with zero understanding of the cultural relevance.) 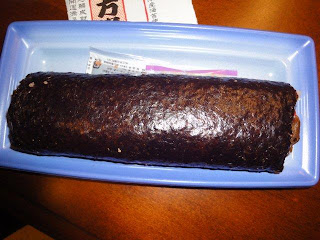 In actuality Eho-Maki really is only a well advertised and tasty maki-sushi (rolled sushi).  It is consumed in a unique fashion.  It is eaten facing the Auspicious Direction determined by the Chinese Zodiac Animal of the specific year.  This year we aimed the long thick roll towards the South, South East Direction (“Nan,Nan-To”).  Customarily you eat in silence and make a wish while devouring the Eho-Maki.  You might make several wishes as the meal requires several minutes.
The rituals date back to the Murimachi Period (1336) but recently the traditions are being spun as marketing tools.  Grocers  advertise Setsubun and Eho-Maki with flashy posters and fliers.  Devil “Oni” Masks are sold or given away as promotional tools and comedy television featuring stars from the Kansai Region work shows around Setsubun.
Setsubun at our home was good fun and the excitement reminded me of Easter Egg Hunts and other great childhood family memories.  Dad (me) donned the Oni Mask and was pelted with beans.  My wife doesn’t remove them from the small packages. (This saves hours of clean up and preserves the roasted beans to be eaten later). 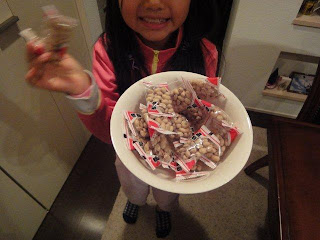 In spite of the weight of the packages they pelted me with indifference.  Our 8 Year Old Daughter screamed and her mother chimed in with “Oni wa Soto, Fuku wa Uchi.”  They allowed me to slip on shoes as I retreated to the front door and resumed their onslaught with the beans until I’d ran outside and up range to safety. 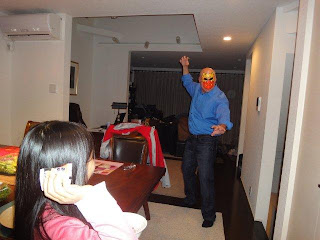 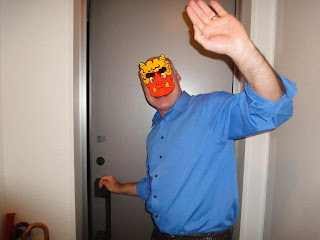 After removing the mask and returning home we picked up the packs and began counting out the individual beans.  One for each year of age.  For me, the count can be considered excessive and the beans could only be finished with the assistance of some cold beer.  Not a bad tradition.  We can’t wait until next February 3rd.
Posted by gcrunning at 11:43 PM