The house seems eerily quiet now that rain has stopped pounding on our skylight, and the winds of the Super-Typhoon Hagibis ceased testing our home’s foundations. My wife and daughter have gone to bed. Both were physically and mentally exhausted after preparing for the worst and waiting out the storm. 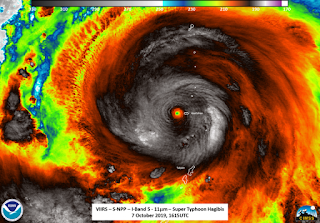 Our family made preparations as the storm moved directly towards Tokyo. We stocked our fridge with food and drinking water and filled the bathtub and storage containers with extra water. (Sometimes water supplies are cut off or are contaminated.) We bought additional batteries, refilled first aid kits, and topped-up the car’s gasoline tank.

There were the usual runs on the food markets, convenience stores, and gasoline stations leading up to the storm, and while the typhoon mounted in intensity.
We monitored NHK weather reports as the television broadcast the storm's progress and warned of floods and landslides. Super-Typhoon Hagibis brought winds estimated as high as 160 miles per hour and excessive precipitation.

Rain splashed down for twelve-hours and measured as much as seven inches in some areas. The deluge created a real threat of flooding by the Tama River, which separates Tokyo from Kawasaki. Its banks are a mere block from our home, and floodwaters could reach our back-door in minutes when the river overflowed.  The Tama River’s capacity reached dangerous levels well before the rains stopped.

Alarms sounded accompanied by notifications on our cell phones seemingly every half hour. They announced areas in Eastern Japan subject to mandatory and suggested evacuations.
When our Regional Government designated our community at a high risk of flooding, we stayed in place. This decision wasn't cavalier nor arrogant.

We didn't want to get caught in a traffic jam and possibly be stranded as floodwaters surrounded the vehicle. The angry winds made travel by foot dangerous, and the higher ground was a few miles away. It would be a severe hike in the pouring rain.

My family elected to ride out the storm and potential flood on the upper floors of our home. We moved valuable items and essential devices to the top floor of the house. Our cat's litter box was relocated to the second floor. (One way or another, Oliver was going with us.)

We moved all the supplies to our home's highest point, and it became a waiting game. The concept was not without excitement. Amid the bombardment by wind and rain from the typhoon, a 4.5 earthquake hit Chiba and decimated homes in some parts of the city. We also saw footage of dwellings destroyed by Tornados in the same region.  (God has a strange sense of humor.)

Hagibis, which means “velocity” in the Tagalog language of the Philippines, has moved north. While enjoying the silence, I’m feeling grateful. We didn't suffer power outages or find our water cut off, unlike less fortunate people living in the path of the Super-Typhoon number 19. Lives and property were lost in communities around us.

Indeed, my family was stressed, inconvenienced, and experienced a lesson in humility; but we did not suffer. We dodged a bullet, and we will finish the weekend in a somewhat typical fashion. It will start by moving things back to their original places on our first floor that remains dry and safe.

Tomorrow will be sunny and hot in Kawasaki, with temperatures projected as high as 29 degrees Celsius. It will also be Thanksgiving in our native country of Canada, and there's something especially gratifying about the timing of this holiday. 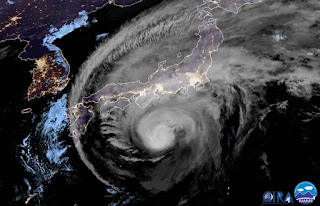 Posted by gcrunning at 2:06 AM