One Night Spent as a Typhoon Refugee at Narita Airport

While lying inside a donated sleeping bag on the floor of Narita Airport last night, I was caused to reflect on the similarities between two tragedies. The feeling of uncertainty and helplessness were evident after both the March 11, 2011 earthquake, its subsequent tsunami, and Tokyo’s recent reaction to the direct hit of Typhoon fifteen. The atmosphere was eerily nostalgic. 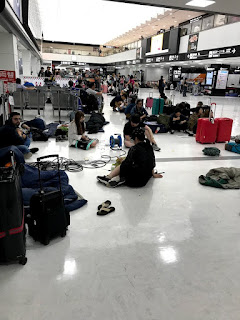 In both cases, transportation and communication systems were disrupted, causing immediate confusion, panic, and frustration. Highways were closed forcing jams and trapping people in their cars for hours, flights were canceled and rerouted, and phone lines and internet were diminished by over demand. 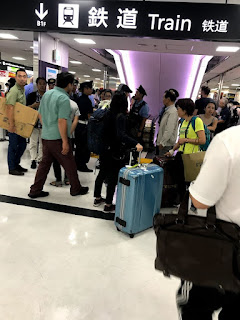 Taxis traveled all night to receive exorbitant fares on routes typically requiring less than two hours to complete. Available trains and buses were packed full while thousands lined up uncertain of future availability nor aware of how to actually book tickets. 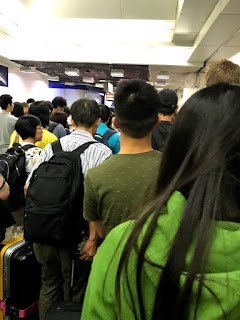 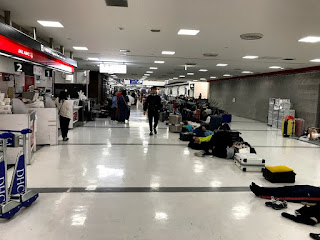 Let’s consider the reactions of the Japanese Airport Authorities who faced the problems at Narita Airport. How did the airport authorities deal with the thirteen thousand stranded passengers whose communication options were limited with minimal choices to travel into Tokyo? 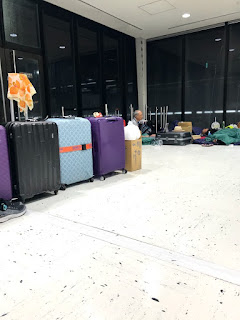 The typhoon refugees at Narita Airport were provided sleeping bags, water, and some snacks. This was impressive as the items appeared to materialize out of thin air. Just as inspiring was the civil conduct of the vast majority of the people facing a night on the public facility’s floor while surrounded by thousands of strangers.

People kindly shared available information about transportation and places where one might secure food. Conversations were mostly upbeat, and polite action seemed to be the default. People disposed of their trash and left washrooms as neat and clean as possible.

The problem at Narita was simply the lack of available data for foreign travelers who were not privy to Japanese announcements, signage, and online reports.

The essential direction regarding bus and train departures and the available taxi services was sadly lacking. Few tourists knew about the luggage courier services available at reasonable rates at the airport. The definition of disruption is "change without preparation," and it was actualized at Narita Airport.

I’m home and comfortable after riding overcrowded trains in the company of exhausted travelers and business commuters inconvenienced by our unexpected appearance. I’ve completed a much-needed shave and shower and am feeling gratified to have the opportunity to experience life as an expatriate in Kawasaki.

The Japanese often listen to criticism and make necessary adjustments over time. I’m sure the next time a typhoon requires thousands to sleep overnight at Narita Airport the essential announcements with key data will be shared in multiple languages.

Two other takeaways: I need to check weather reports before flying, and I’m not the only one who snores.

Posted by gcrunning at 4:03 PM