Fifteen years ago I attended the Miyazakidai Kindergarten Sports Festival to watch my blonde haired daughter run, dance and even joined her in a puzzle completion relay.  Another surprise came when the PTA drafted me to a Relay Team of Parents & Teachers to relive Youthful Memories by “leaving it all on the track”.  Fathers slid, fell, tumbled and eventually completed the race but far less gracefully than the young teachers who glided around the track.
“Déjà vu all over again.”  Last Sunday we awoke early to eat breakfast in preparation for the local Elementary School’s Sports Festival.  My 8 year old daughter donned her PE uniform and stylishly wove her red scarf into her hair signifying her as an official member of the Aka (Red) Gumi Team.  My Father- in-Law departed first with a Ground Sheet and Golf Umbrella to mark territory near the Red Team Section. This assured  us of plenty of space for our Family Picnic Lunch at intermission.  The School Sports Festival is a Major Community Event in Japan.  Years of tradition, serious preparation and real enthusiasm make for an Excellent Family Day.  It might be considered a microcosm of Japanese Society  worthy of consideration for anyone living or doing business in Japan.  Following are a few observations of the Inada Elementary School Sports Festival common to Public Schools from Hokkaido to Okinawa:
-Preparation:  the School Administration, Teachers and PTA start practices 3 weeks prior to the Event.  It shows! Events run like clockwork with rare delays (if any).  We started at 9 a.m. as promised and finished at 3 p.m. as recorded in the program.  (An achievement credited to the practice of “hurry up and wait”.  Children arrive at school before 8:15 a.m. for the 9 a.m. start and line up for events well before scheduled times.)
-Team Spirit:  the School is divided into four teams marked by colors Red, Green, Gold and Blue.  Each Team has a fight song, wears colored head bands (young children have one sewn to their school PE Cap), execute rehearsed cheers (screams), bang drums, and  wave flags.  The Oendan (Cheer Masters) and Team Captains wear a Cape matching Team Colors. How ultimately cool for a Grade 6 boy or girl? 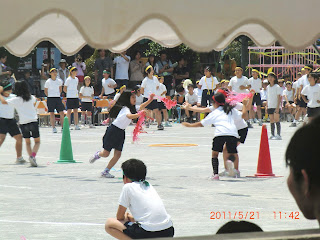 -Everyone Runs: Grade 1& 2 run a 50 meter sprint,  Grade 3 & 4 run 100 meters and the Seniors in 5 & 6 run the full 200 meter loop.  Points are awarded for first to sixth place finishes and are tallied to decide the Winner of the Annual Sports Festival Cup.  This year the children were handicapped according to practice times and heats mixed with boys and girls were competitive & often Exciting.
-Creative Relays: the School Coordinates Dozens of  various Teams Races using Giant Balls, tricycles, long sticks, short sticks, elevated baskets and building blocks. They are all engineered to challenge appropriate to age group.  My favorite was the 1st Grader’s  Contest where hundreds of children simply throw balls simultaneously at elevated baskets.  When the buzzer sounds finishing the event, the crowd counts as the 4 baskets are emptied. (The Red Team ultimately won by One (Red) Tennis Ball.
-Traditional Western Events: Grade 3 Children competed in “tsunahiki” (Tug of War) as did selected members of the PTA .  Competitive Parents are loaned  garden gloves  a week prior to the festival.  My daughters’ team won all their challenges and they cheered and celebrated like Olympic Champions.  (My Team of intrepid parents were eliminated quickly & we walked off the field with heads hanging low.)  The Sports Festival wouldn’t be complete without Classical Running Relays.  At Inada Elementary School they include as many children as possible. The first three grades are represented with a team of 20 and grade 4 thru 6 assemble a  team of 10 students.  Several close finishes brought the crowd to their feet. (It reminded me of a horse race.) 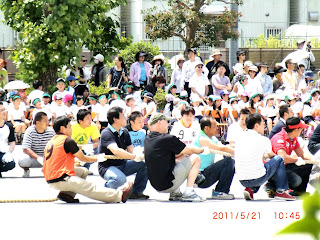 -Music:  my hat goes off to the director of music for the festival.  They played a sensational selection of Classics, Movie Sound Tracks and Japanese Pops that nicely backed up each event.  The Theme from the Titanic was appropriate to our PTA Tug of War Effort. (Nice)
-Family Picnic:  After devouring my Obento (Japanese Lunch Box) including tasty sautéed pork, deep fried shrimp, white rice and spicy chicken I scanned the Campus.  Every spare meter surrounding the School Field was covered by blankets and ground sheets.  Extended families  (lots of Grandparents) were enjoying their lunch. This part of the event was simply Great.  (I wonder what people thought while I ate the Japanese Lunch and my brown eyed daughter born in Kyushu dined on Ham Sandwiches.)
-Speeches:  “Ganbaree Nihon”:  (Fight on Japan.)  Children made speeches, Parents used the microphone, Teachers & Administration offered their advice. It was all about “giving their best shot” and “finishing with the feeling that they’d done their Best” and Why not?  The children worked hard and showed great spirit.  They cheered each other on and suffered the “agony of defeat”.  It was a roller coaster of energetic emotion and everyone finished smiling.
Caveat:  Bring sun block as the late May Japanese Sun can fry you.  (They’re calling me Mr. Red Legs.) 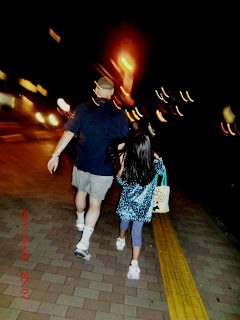