My litmus test for Communities is simply a Morning Run. Reactions to my presence & greetings as I stride thru a Town Center allows for a quick and hopefully accurate look at the Heart of Town. (Kyoto residents cheer & smile as opposed to Down Town Osaka People who growl and glare.)
On several runs around the affluent Lilongwe Area 9 (home of former President Bakili Muluzi) the Gate Guards, Commuters, Road Side Vendors, Field Workers and Local Villagers proved very friendly. “Good mornings” were returned, waves exchanged, some encouragement and smiles, and the ever popular thumbs up was well exercised. (An Indian Couple, American Christian Missionary and a Blonde Woman on a Racing Bike were the only Expatriates witnessed outside their gates and they were friendly too.)
A run in poor rural area of Salima was much the same with the exception of English Language Competence. (Smiles and thumbs up are alive and well in Salima.) Warmest salutations were received from the Mangochi Villagers by South Lake Malawi. The only runners other runners observed anywhere in Malawi were usually barefoot and they moved with urgent necessity towards their place of employment. Clothed in slacks and long sleeve shirts they glided along and frankly as athletes kicked my ass”.


Some observations and notes:


-Most Malawans travel on foot, by bicycle, or in very crowded trucks. The few wealthy individuals drive motor vehicles thru the community at dangerously excessive speeds.(Most goods seemed to be transported to and from Villages by foot and loads were carefully balanced on the individuals head. We saw laundry, bundles of fire wood and jars of food carried in this fashion.) 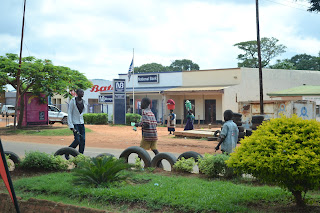 
-Village Homes are made from a lime, straw and mud mix and covered by thatched roofs. The more wealthy build with red brick, wood and corrugated iron sheeting. Glass windows are rare. 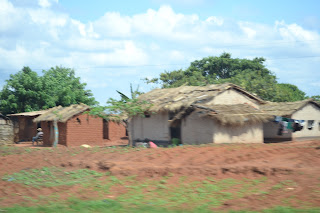 -Men work in the fields bare-chested and wear slacks; women wear long skirts, short sleeve shirts and wrap their head and often carry their infants on their backs. Women seem to do more work planting and harvesting the core crop of “Maize” while their children watch or assist. Tools of choice are the “Kasu” African Hoe & “Panga” African Machete. Most work shoeless in spite of scorpions, snakes and other creatures unfriendly to human skin.


-Several children ranging in age from four to twelve carried tiny infants on their back. With one of three Malawians testing positively for HIV the burden of child care is falling to the very young and ancient. 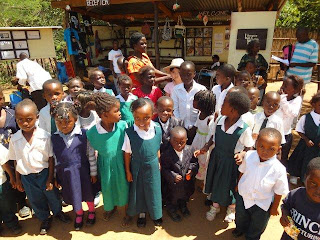 -A young Labrador joined my run thru a Village in Mangochi (South of Lake Malawi) and the young children’s smiles faded. (Wild dogs, rabid animals and Hyenas prey on Village Children.)


-Animals have No Rights in Malawi: goats and chickens are tied and bound to bicycles for transport to slaughter. Cattle are transported in frightening conditions; we witnessed a truck empty at least 20 people followed by the removal of a cow that had been tied and placed on the floor and used as a chair. Guard dogs are muzzled, work in the sun and are rarely given water.


-Lake Malawi and its green hilly and sometimes mountainous shores offer some of the most beautiful scenery in the World. The Lake is one of the Earth’s deepest and teams with fish that we’ve enjoyed throughout our time in this beautiful country. (Cichlids, Kamphango (Cat fish), Chambo (white fish) and Ncheni (white fish with a blue shiny skin and succulent flavor). 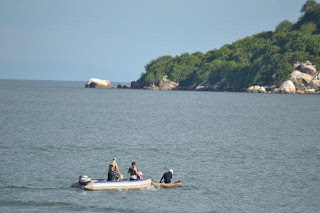 -Dug Out Canoes are sold for 8000 Kwatcha ($50.00 American) and are used by fishermen. The boats are temperamental and require extreme skill and balance to maneuver. Fishing is done at night as fish are attracted by torches. Few fisherman know how to swim and often the sudden storms of Lake Malawi widow the poor women waiting in the Village.


-We ran past families walking to Church on Sunday Morning, past small windowless Churches and more exotic Mosques. Religion is alive in Malawi & doesn’t seem to be an issue.


-Capitalism: Road Side Entrepreneurs outside Trading Centers sell carved toys ( Land Rovers) and Traditional Masks, fruit, vegetables, fish and hats weaved from flat elephant grass. They hold up their harvest, catch or craft to catch the eye of drivers passing by.

The Malawi I witnessed while running is beautiful. The rich/poor dichotomy is constantly in your face and can be unnerving. The People are generally happy and industrious. Living is a struggle for the poor.